FROM DEATH TO PERFECTION

Everyone, everywhere: listen up! Here's a story of hope! There is no silver spoon in hand. You got to want it, know you can acheive it, and act as if you are acheiving it even when you think you can't. Have faith!
- Bill Rueger

On February 27th, 1986, Stan Travis was a passenger in a pickup truck that overturned eight times in a near fatal car crash. Although the driver only suffered from a bruised lip and was restrained due to his seatbelt, Stan was ejected from the vehicle. He went through multiple life-threatening surgeries including the removal of his left temporal lobe, lost function in the right side of his body, lost his speech, suffered from pneumonia three times, dislocated one shoulder, broke one arm, and multiple facial bone fractures.

Stan spent five-and-a-half months at the Bryn Mawr Rehabilitation Hospital in Malvern, Pennsylvania (recognized as the best brain injury rehab hospital in the country). His surgeons, doctors, nurses, family and friends thought that he, at best, might remain in a vegetative state for the rest of his life - speechless, motionless, and almost brainless. But all those who loved him - and even Stan himself - had other plans.

The Stan Travis Story - The Journey From Death to Perfection

A book by Louise Travis and Bill Rueger

Thank you so much for sharing The Stan Travis Story – The Journey from Death to Perfection.

I must admit, I read it more than twice! One thing that stuck in my head is when you said, "I am no one special … God will do for you what he did for me." This is a story of absolute faith. Your faith and commitment show on every page. Stan had a whole community believing in him and believing in their Higher Power! Miracles do happen – your book is proof! I know it must have been difficult to write but it was as if all the words simply poured out from your heart...

Love, Lynn F.
"Happiness is a choice. It's an attitude and being grateful."
May God Bless You Always.

Stan is involved in a near fatal car crash where the vehicle overturned eight times, resulting in multiple life-threatening surgeries and injuries.

Continuing his journey on the road to recovery, Stan regained use of his entire right side and amazingly water skied as proof of his physical and mental courage.

Having acquired seizure disorders from the complications of the car accident, Stan went from suffering from an occaional few to hundreds of them, but that did not slow down his will nor strength to recover.

Defying all mental, physical, and emotional odds, Stan bowled a perfect 300 game on January 25th, 2011, marking his journey from the accident a "miracle and an amazement".

The Travises and Bill introduced The Stan Travis Story to the Phoenix Valley, Arizona November 2013

Stan continues to bowl, learn and interact with others, becoming an inspiration to the traumatic brain-injured community.

Today, Stan has learned how to speak and walk again, along with full use of his right side. He has fully recovered a shattered leg aided by a twelve inch stainless steel plate and thirteen screws and bolts which have since been removed. He is blind in his left eye and has one-quarter vision in his right.

Stan has given many talks about his return to life and has been given numerous awards for his tremendous courage and spirit. He is an educator and endurance athlete of a different kind! 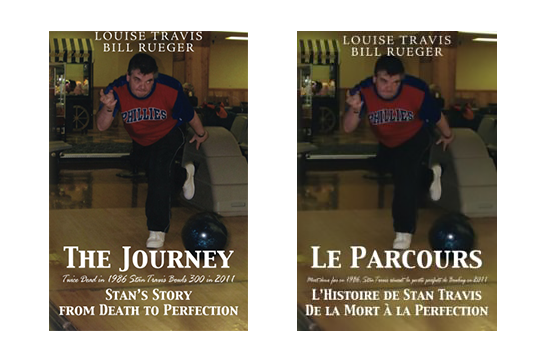 The Journey: The Stan Travis Story tells the story of a person's ability to rise, reinvent and achieve what some might say is impossible. It is a real story that speaks to the unconditional support of a loving family and valued friends. This book speaks to the contributions and sacrifices we all make to grow and overcome our obstacles. If we care, anything is possible!

Even though this book is about Stan Travis' story, there is another one waiting to be told. You may just find your own personal story hidden within the subtitle: A Journey From Death To Perfection.